The left can’t meme is sacred law of the internet made by right-wing activists.

The right-wing people claim that all leftist memes are shitty, biased political propaganda or just straight up cringy.

They also claim that leftists cannot even use the meme formats correctly.

Left-wing activists, however, claim that the right-wing made this idea up as counter propaganda by Trump supporters and rednecks.

Ironically, both sides are calling each other “snowflakes”, meaning “overly sensitive” in internet lingo. 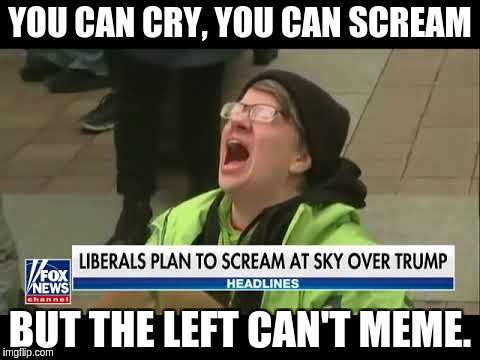 In August, 2016, an Anonymous user on 4chan shared a claim that “Our memes work because they’re actually true, and it’s the reason the left can’t meme”.

The claim became famous during the 2016 US Presidential Elections when the voters were extremely split.

The phrase started circulating the internet during the 2016 elections, but significantly rose in popularity after the election of President Trump.

In 2017, the leftist meme “Fully Automated Luxury Gay Space Communism” was shared by Facebook page “Hoppean Snake Memes” with the caption “The left can’t meme”, as a provocation to the leftists.

Besides it’s original definition, leftists on the internet defines the phrase as something only angry, left-hating right-wing activists say.