The You Wouldn’t Get It meme refers to a quote from the famous movie, Joker, which aired in 2019.

In one scene, the main protagonist Arthur Fleck responds with the phrase to his therapist.

Around the middle of October 2019, the phrase quickly gained popularity online due to its versatility.

On the images, the line of the therapist is usually changed to something else, to which the response will always be “you wouldn’t get it”. 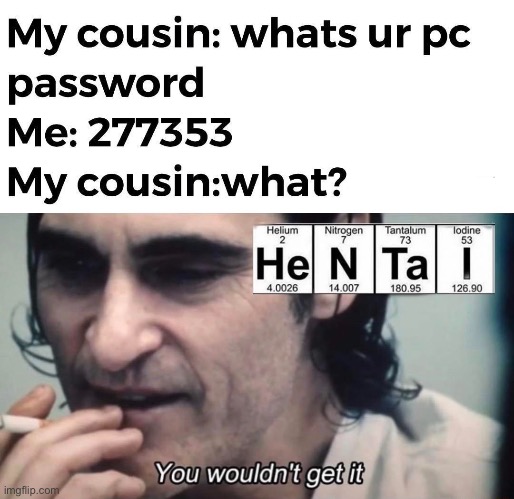 The American psychological thriller premiered in the United States on October 4th, 2019.

In the last scene, the character Arthur Flack (Joker), played by Joaquin Phoenix, says the phrase as a response to his therapist’s question.

During the interview, he starts giggling out of nowhere about a joke he thought about. After the psychiatrist asks about it, he responds with the now famous catchphrase “you wouldn’t get it”.

The earliest known meme was posted on Reddit by the user losteggwhites, to the subreddit /r/Kanye. Over a couple of days, the post gained over 4,100 upvotes.

The sentence inspired many to create funny content for the internet, mainly in the form of memes.

However, the format didn’t start significantly spreading until a Redditor, Zucc2020, posted a meme featuring the screenshot of the movie on October 18th, 2019. Over two weeks, the post received 38,500 upvotes.

DigitalCultures » Memes » You Wouldn’t Get It